Ah I see today a listing on eBay for a 35mm slide of our Veronika for Set 397. I wanted to make the real fans aware of this dupe by some guy trying to rip off the public simply to make a quick buck !!!! 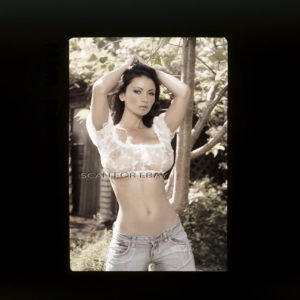 This set was shot by James Stafford as you can see if you click the Set link above. James is one of the photographers from which I have purchased everything he has to sell. I know for fact that James used a digital camera for this set so how could a 35mm slide of it exist?? Except if someone created one after the fact?? The last time James used a slide camera was for part of the Set 381 shoot… he told me that for that set he shot 1 roll slides and the rest digital as it was his first shoot that he ever went digital and figured he would take 1 roll at least using film just in case the digital did not work out. That was in 2005 … this slide being sold was shot in 2008 by the time James had gone fully digital. If you look close the slide being sold is actually “Photo 4” from that set … funny how a digital pic can be exactly the same as a 35mm print (unless a copy of course!!!!)

So buyer beware …. don’t buy and give this guy the satisfaction of ripping off a fan!!!!

BTW … this is not the first time that someone has tried to get away with selling fake slides of Veronika …there are very few actually up for sale … I good sign to tell if a fake is if the image is EXACTLY the same as one currently in one of the sets …. if not then there is a very good chance that it is a true original.