A new set comprised of 2 pics was released today in honour of Veronika’s 47th Birthday. This is actually a very old set shot as part of one of Veronika’s early photo shoots in 1997 by photographer Roberto Rocchi.

One of these 2 pics has actually been part 100 images on the website’s home page “scrolling image banner” since this website started. It was from the private collection of www.VERONIKA-ZEMANOVA.info and hidden there to see if anyone would notice it. Just this past month it was finally discovered by a fan. The second pic from this set comes from an issue of Japanese magazine “Dick”. These are the only 2 images known to exist for this set. The reflection in the mirror provides a perfect simultaneous view of Veronika from the front and from behind. Can’t ask for anything better !!!

Here’s a preview of the set’s contents:

You can find a link to the set: http://www.veronika-zemanova.info/Index/set.php@set=528.html and the full sized images are available as always to the members of the forum.

Yet another surprise uncovered in a recently purchased issue of German weekly magazine “Das Neue Wochenend” … this time an issue from back in 2002 contained a new pic for Set 009.

Through the magic of Photoshop I managed to extract the image from the magazine (correcting the orientation of course!!!) and create a new pic for the index 🙂

This set was shot by famed Italian photographer Roberto Rocchi back in 1999.

It did not seem like that long ago that I had reported that the 900th magazine in which Veronika appeared was found … it is with great pleasure and amazement to be honest that today I unveil the 1000th magazine added to the Veronika collection!!!!

Thanks to the tireless efforts of fellow fans PyroGray, Bta and myself we’ve finally hit this milestone number in Veronika magazine appearances.

Now the magazine that turned out to be the magic number 1000 could have been anything, another old reprint, a cover only (or even worse, a small cover picture only) but as luck would have it it wasn’t. It was a copy of a very special Keck! magazine from 1999, and although it only contained one picture, it turned out to be something quite special …. something from a set from 1996 that although rumoured, has not been seen before. It’s from a completely unknown boy/girl set featuring Veronika in a silver-streaked blonde wig. I present it here for you now. Hope you like it!!!! 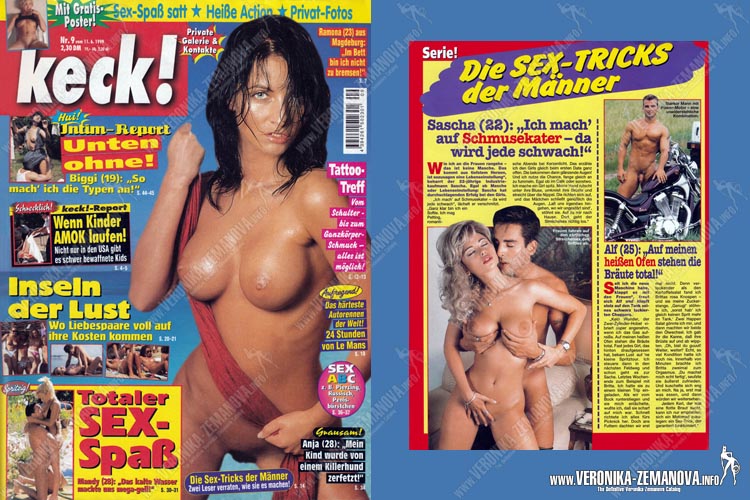 The set was shot by Roberto Rocchi back in 1996 … in a conversation I had had with Rocchi several years ago he had told me that he had shot Veronika in many many more outfits / settings and with several other men then what was ever released. He said unfortunately that all those photos had been lost when the Vanity Agency closed it’s doors. I had always hoped to find some of these missing pics … I guess this one pic is proof that they do exist!!!

This pic was shot in Italy by photographer Roberto Rocchi back in 1999. This would be the last time Veronika would pose for Roberto, having worked with him twice before earlier in her career. Rocchi said of Veronika:

I for one am not going to disagree with that comment 😉

These pics were all shot by Roberto Rocchi and Franco Marocco back in 1996 and 1997. The sets from 1996 were some of very first “professional” shoots Veronika had done. Rocchi wrote in one his books that Veronika was one of the the most beautiful models he had ever photographed. I think we will all agree with that. You could argue that it was these Rocchi sets which started Veronika’s career .. since it was likely these pics which were seen by Mayfair to convince them to pursue Veronika a year later and the rest is history.

Found this absolutely bizarre single photo of Veronika posted in an issue of the German magazine Sex Woche No. 35 (1998).

I am fairly certain that it was shot around the same time as the infamous boy/girl set since I heard from a reliable source that Roberto Rocchi who shot the boy/girl set also shot many other sets of Veronika that same weekend, only a few scattered pics of which have ever been found in print. I also heard from the same source that most, if not all, of the original material from that photo shoot has been discarded … so unless more is found buried in a magazine already printed, we are very unlikely to find anymore pics of this blond wig set or any others from that early photo shoot of Veronika (time to cry now!!!)

I have added this photo to the Misc. Set of the index as photo #30.

Set 207 was another one of those Sets which for some reason had unique photo sessions grouped together as one. This time 4 sets. Again as before, I have logically split them into the separate sets.

Found this wonderful pic for Set 207 in an old issue of Praline magazine from Germany. Absolutely gorgeous!!!!

Preview and actual pic attached. Will become pic #26 in the index for Set 207.

Photographed by Roberto Rocchi in Spring of 1997.

Love the extra “airbrushed garden” down under 😉

This is the next set which was in reality 3 distinct photo sessions released originally as 1 set. This time it is Set 073. Again I have logically split them into 3 separate sets: the first being pics where Veronika wears a grey top and lying on a couch, the second being where she wears black top and lies on the floor and the third where she wears a black bra and poses by a plastic chair.

Here are the previews of the revised sets:

Jan 2014 marked the 25th anniversary of the German magazine Dynamit. In commemoration of that milestone, they published a special issue looking back at the models which have graced their publication over all those years. Veronika of course was one of the featured models having appeared in their magazine close to 20 times. The photo they used was shot by the 2 Italian photographers of Roberto Rocchi and Franco Marocco and was initially featured in the June 2000 issue of Dynamit. Here’s a preview: